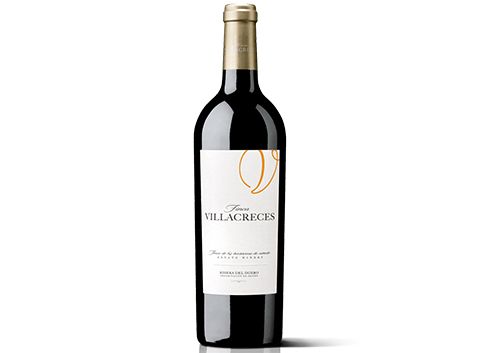 Finca Villacreces is a wine made with grapes of the 86% Tempranillo, 10% Cabernet Sauvignon, 4% Merlot varieties collected from the 64-hectare vineyard that surrounds the winery in Quintanilla de Onésimo at the end of September. It is hosted by the P.D.O. Ribera del Duero.

Finca Villacreces is a wine with an intense cherry red color, with garnet tones. It has a powerful aroma of ripe fruit, liquorice with mineral and balsamic nuances provided by the cabernet, its hints of toffee complete its complexity. On the palate, fat entry with volume, long and persistent. Tasty with ripe tannins, hints of liquorice, black fruit and coffee.

The first bibliographic data on the existence of this farm on the banks of the Duero belong to its first inhabitant, the Franciscan friar Pedro de Villacreces, from whom it takes its name. Along with him, a group of clergymen, among whom was San Pedro Regalado, patron saint of Valladolid, settled in that privileged moor to dedicate himself to prayer and to the cultivation of the land, which already had a small vineyard for their own consumption and that of the nearby monasteries.

For several centuries, Villacreces was a retreat center for Franciscan hermits dedicated to reflection and penance, as well as to working in the fields and observing nature. With the arrival of the confiscation of Mendizábal, in 1836, these lands passed into private hands, specifically, to the marquisate of Teodosio Alonso-Pesquera, senator of the kingdom with Alfonso XIII, who shortly after would grant a royal concession for which Finca Villacreces disposes of Duero water rights.

The 2nd Marquis of Alonso Pesquera was the one who sold this farm at the beginning of the 20th century to the Cuadrado family from Valladolid, who used the farm as a recreational area, hosting, in turn, distinguished guests. One of them, Peter Sisseck, used the winery and part of the vineyard to make his Flor de Pingus.

In 2004, after a long search throughout the Ribera del Duero, Gonzalo and Lalo Antón, who already had a winery in Rioja (Izadi) and Toro (Vetus), met the Cuadrado family. Pedro Cuadrado gave them a glimpse of his interest in disengaging himself from the wine business and looking for a replacement for the estate, an opportunity that they took advantage of to acquire one of the most spectacular estates in the Ribera del Duero. After the remodeling of the winery and a painstaking work to recover the vineyard, Villacreces was reopened in 2007

Be the first to review “Finca Villacreces” Cancel reply